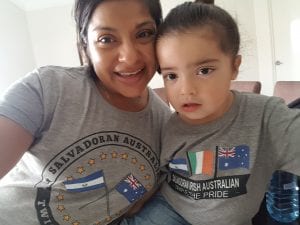 This story is a journey of many firsts…many new beginnings and some real insight of how Nataly travelled to Australia and has now made Australia home – a sentiment a lot of us resonate with, a road a lot of us have travelled on.

Nataly’s story begins when she and her family journeyed from El Salvador in Central America, to Brisbane, Australia in August 1985. Nataly was just 6 years old.

My family first resided in Wacol, Brisbane which at that time was an Immigration Centre – “housing was made up of small units and townhouses and there were many different nationalities and languages spoken around me. I remember meals were served in the biggest ‘crib’ room I’d ever seen! Bright with fluoro lights, long bench tables…”

Within a year, my family moved to Far North Queensland where we settled for many years, between the townships of the Burdekin and Townsville. It was the first real sense of belonging “not because I felt I fit in but because we were there for a significant period of time and I made some lasting friendships.”

Looking back at that time, perhaps my birth country and my adopted country had a lot of similarities.

I wasn’t aware of the differences of ‘skin colour’ until I was in high school, when a boy told me to ‘go back where you came from’. It would be the first of many times I would hear that phrase. I also realised I’d heard these comments before but, and perhaps it was age, but I’d never really allowed myself to absorb them.

For many years after that, I experienced racial bullying, which was often ignored by people in authority.

It wasn’t until a friend asked one the bullies why she disliked me so much. The response was “Because she’s always so happy”. I realised that day that the colour of my skin wasn’t the problem.

I can’t lie and say those experiences and the ones that followed didn’t affect me – I still carry a few scars. But what I learnt along the way is that whilst I may be considered a ‘minority’, I am also part of a greater number – one that is proud of this sunburnt country, the cultural hotpot and diversity that is this giant island, an island that I can call my Australia.

There are over 300 languages, other than English, spoken in Australia. This tells me that many fabrics make up the Australian flag. I am part of that fabric; so is my Irish husband and our son, who is bi-racial and the first born Australian in our little family. He will speak two languages, English and Spanish. He will know Australia is his home and that Ireland and El Salvador are part of his fabric.

There is so much abundance in my adopted country for me to feel anything other than hopeful.

“El Salvador gave me my roots. Australia has given me a future.“

What a story, what a journey !! Do you have a story you’d like to share with the world ? eMail me at [email protected] and we’d love to give your story a voice !

close
Start typing to see products you are looking for.